1. OVER A STREET - When the flag is displayed over the middle of the street, it should be suspended vertically with the union (blue field of stars) to the north over an east-west street, or to the east over a north-south street. 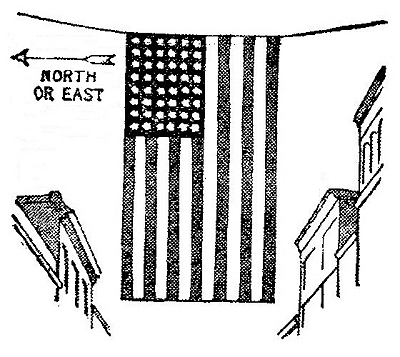 2. CROSSED STAFFS AGAINST A WALL - The US flag, when displayed with another flag against a wall from crossed staffs, should be on the flag's own right (that is... to the viewer's left), and its staff should be in front of the staff of the other flag.

3. HALF-STAFF - The flag, when flown at half-staff, should be first hoisted to the peak for an instant and then lowered to the half-staff position. The flag should be again raised to the peak before it is lowered for the day. By "half-staff" is meant lowering the flag to one-half the distance between the top and bottom of the staff. Crepe streamers may be affixed to spear heads or flagstaffs in a parade only by order of the President of the United States. 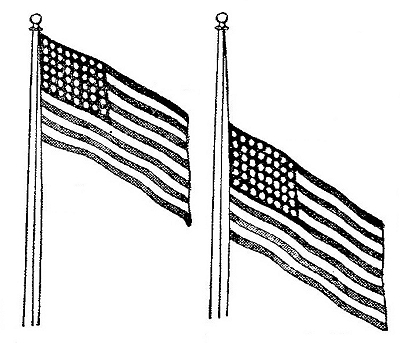 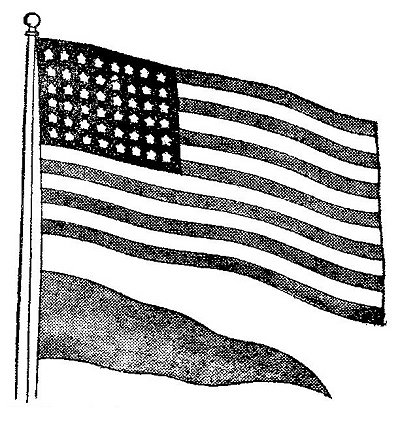 5. FROM A BUILDING - When the flag is suspended over a sidewalk from a rope extending from a house (or other building) to a pole at the edge of the sidewalk, the flag should be hoisted out, union (blue field of stars) first, from the building. 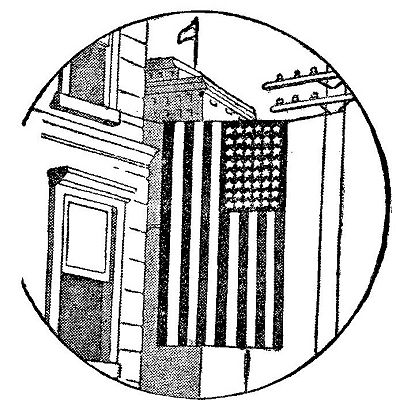 6. AT PEAK OF STAFF - When the US flag is displayed from a staff projecting horizontally or at an angle from the window sill, balcony, or front of a building, the union (blue field of stars) of the flag should be placed at the peak of the staff, unless the flag is at half-staff. 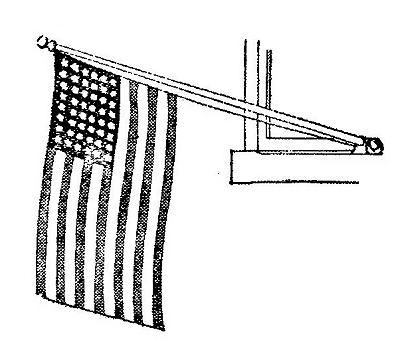 7. CASKET - When the flag is used to cover a casket, the union (blue field of stars) is at the head and over the left shoulder (of the deceased). The flag should not be lowered into the grave or allowed to touch the ground. 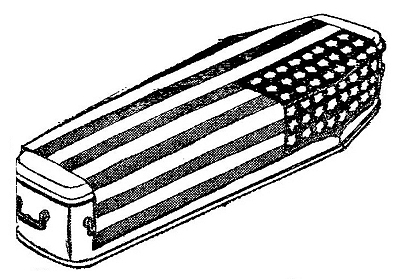 8. VERTICAL or HORIZONTAL (This and #12 are the most common errors when displaying the US flag.) - When the flag is displayed in a manner other than by being flown from a staff, it should be displayed flat, whether indoors or out. When displayed either horizontally or vertically against a wall, the union (blue field of stars) should be uppermost and to the flag's own right, that is, to the observer's left. When displayed in a window, it should be displayed in the same way, that is with the union (blue field of stars) to the left of the observer in the street. When festoons, rosettes or drapings are desired, bunting of blue, white and red should be used, but never the flag.

9. PROCESSION or PARADE - The flag, when carried in a procession with another flag, or flags, should be either on the marching right; that is, the flag's own right, or, if there is a line of other flags, in front of the center of that line. 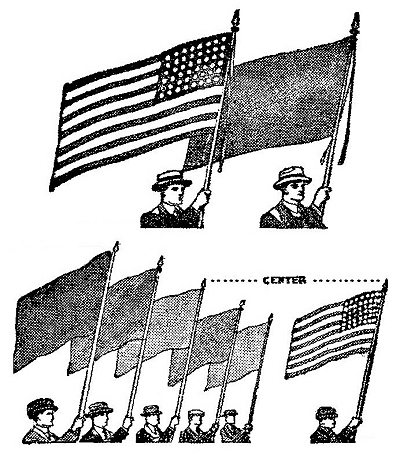 10. GROUP OF FLAGS - The US flag should be at the center and at the highest point of the group when a number of flags of states or localities or pennants of societies are grouped and displayed from staffs. 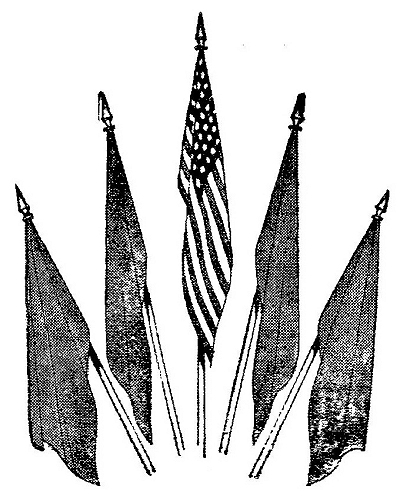 11. OTHER NATIONS - When flags of two or more nations are displayed, they are to be flown from separate staffs of the same height. The flags should be of approximately equal size. International usage forbids the display of the flag of one nation above that of another nation in time of peace. 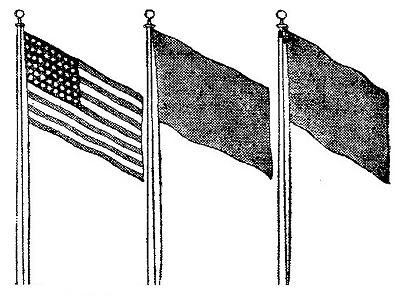 12. AT PODIUM or ON STAGE (This and #8 are the most common errors when displaying the US flag.) - When displayed from a staff in a church or public auditorium, the US flag should hold the position of superior prominence, in advance of the audience, and in the position of honor at the clergyman's or speaker's right as he/she faces the audience (to your left as you look at the speaker). Any other flag so displayed should be placed on the left of the clergyman or speaker (to the right as you look at it from the audience).

MOVING OBJECTS - In recent years, it has become increasingly popular to display the US flag on uniforms, trucks, jets, and other moving objects. In these situations, display the flag as if it were flying from a staff being held vertically and walked down a street in a parade. For example, if the horizontal US flag is displayed on the person's left sleeve or left side, use the traditional horizontal flag with the blue in the upper left. But if the flag is displayed on the right sleeve or right side of the person's uniform, the horizontal US flag would have the blue in the upper right, as if the flag were flying from a staff. If the flag appears on the person's chest, the standard horizontal flag would be used (blue in the upper left).

On a jet or other moving vehicle, the horizontal US flag on the port (left) side of the aircraft would use the traditional flag with the blue in the upper left. But on the starboard (right) side of the aircraft, the horizontal US flag would have the blue in the upper right, as if the flag were flying from a staff. This seems to be backwards and perhaps awkward to some, but simply think of it as a staff from which the flag is flying (moving).

Below are excellent examples of how the US flag is correctly displayed on moving objects. The blue is in the upper right when the flag is displayed on the RIGHT side of the moving object, as if the flag were flying in the breeze from a staff in a parade. 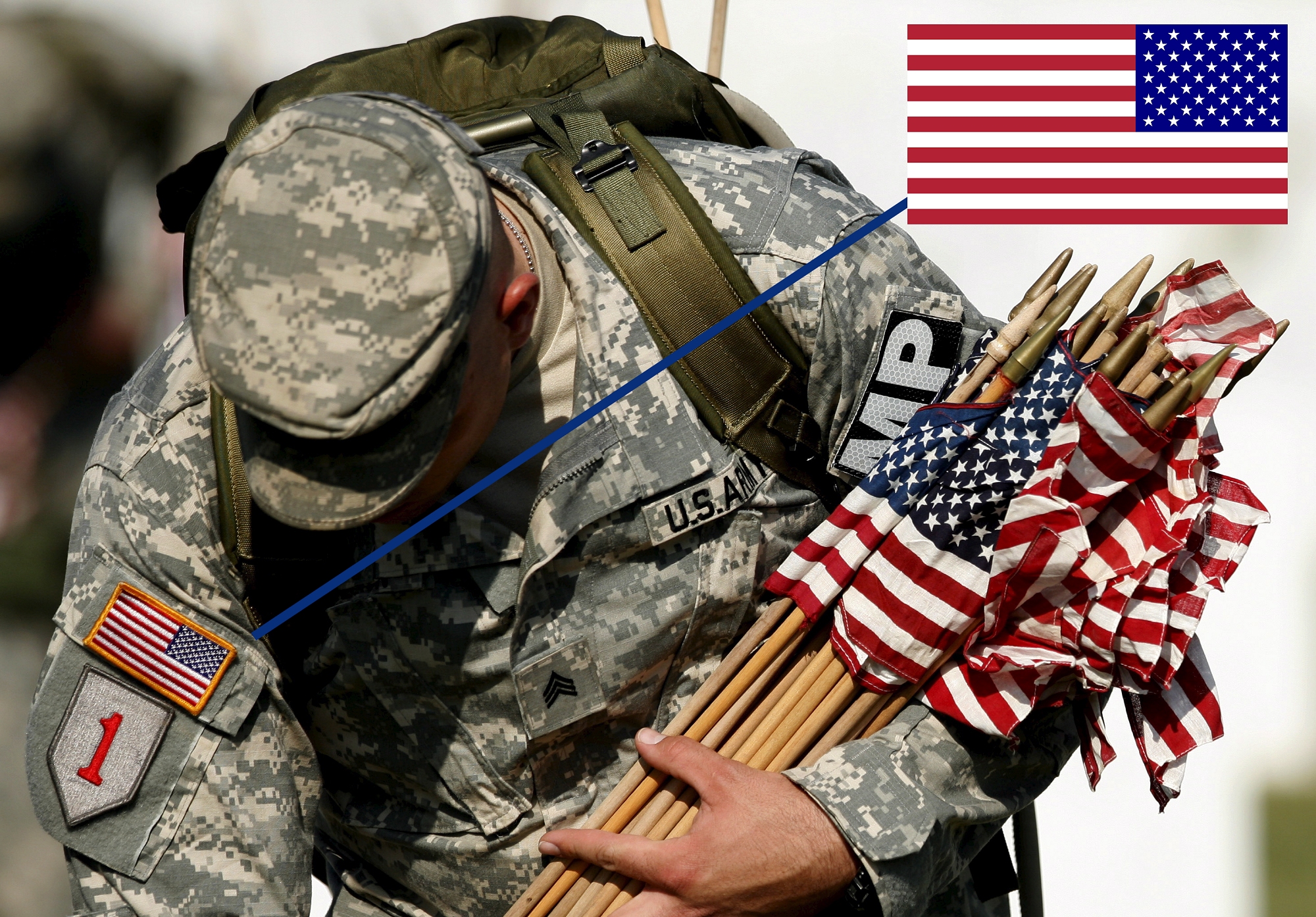 Vintage black-and-white artwork courtesy "The Flag Code," a 1924 brochure by the National Society Daughters of the American Revolution.